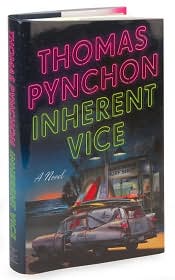 I walked into Barnes & Noble to purchase Thomas Pynchon’s new novel, Inherent Vice.  It’s currently on The New York Times and Publisher’s Weekly best-seller lists, but I couldn’t find it.

I first looked on the big display of hot new and popular books a few steps from the entrance. Not there. I wondered if I was just not seeing it, as there’s such a gluttony of titles on that table.

I then went to the bookshelves that claim to display New Fiction. Not there.  (Thomas Pynchon’s book was published this month.) But I did see and pick up Sarah Water’s book, currently long-listed for the Booker, The Little Stranger.  It came out four months ago.

Next I went into the Fiction aisle under “P”.  There were paperbacks of Pynchon’s The Crying of Lot 49, V, Vineland, Gravity’s Rainbow and Mason & Dixon but Inherent Vice? Not there.

Next I went to an overstacked table of New Fiction on the way to the café. Books are piled up like bricks at a patio retail store. (See below.) Inherent Vice was not there.  Or so I thought.  Here I experienced what I often experience at B&N: so many books crowded together that my eyes don’t see what I’m looking for.

I finally asked for help, and the Information Man lead me back to this table where, sure enough, Inherent Vice sat high up under the New Fiction sign between Nora Roberts’ Black Hills and John Sandford’s Wicked Prey. (That’s like putting a Nobel Laureate economist next to Suze Orman.)

Nothing indicated that here lies a novel getting rave reviews and — yes — on best-seller lists. A new book written by a formidable writer known for his dense, complicated narratives, whom the Los Angeles Times describes as “worthy of intense inquiry,” whose novels are so complicated they’ve been hard to read … until now.

Shame on you Barnes & Noble for burying this unique opportunity to bring to the forefront the phenomenon of a very readable work by this 72-year-old Great American author.

How can the many who walk through the B&N doors — who are unaware of the best-seller lists and the critical reviews and commentary and who are overwhelmed by so many book choices shouting at them — be given the chance to be introduced to Pynchon at this moment of his readability, if he’s treated with such disregard?