This month, Alma Guillermoprieto receives the International Women’s Foundation Lifetime Achievement Award, affiliated with the organization’s Courage in Journalism awards, a shout-out to women who “risk it all to report stories that must be told.”

Readers of The New Yorker, The New York Review of Books, The Washington Post and The Guardian will recognize her name, which frequently is a byline in those and other publications.  Guillermoprieto is highly respected for the insight she brings to Latin American political and cultural life, including the region’s struggles with drug and civil wars, as well as government violence visited upon ordinary citizens. She’s acclaimed not only for her journalism but also her four books.

Her first book, published in 1990, documents the year Guillermoprieto immersed herself in the traditions and rituals of the samba. Nominated for a National Book Critics Circle award, Samba takes place in a shanty town outside Rio de Janeiro where Guillermoprieto lived for a year amidst the powerful energy of samba dancers preparing for competition in the annual carnival parade.

After Samba, this award-winning journalist published two collections of her reportage. The Heart that Bleeds: Latin America Now published in 1994 gathers her New Yorker reports filed between 1989 and 1993 about the turmoil in Latin-American nations approaching modernity. Looking for History: Dispatches from Latin America collects more of her articles and followed in 2001: “Only Alma Guillermoprieto, the most highly regarded writer on the region, could unravel the complex threads of Colombia’s cocaine wars or assess the combination of 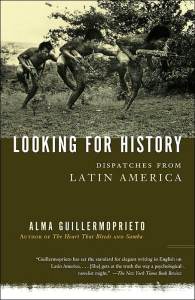 despotism, charm, and political jiu-jitsu that has kept Fidel Castro in power for more than 40 years.” (via Random House)

Her fourth book, Dancing with Cuba, A Memoir of the Revolution, was published in 2004, detailing Guillermoprieto’s six months in 1970 employed as a dance instructor in Havanna’s state-run art school. Katha Pollit wrote in The New York Times, “[Guillermoprieto] uses dance as a lens through which to explore the aspirations and injustices and contradictions of a whole society. It’s a fresh and lively perspective.”

One could say that of Guillermoprieto’s work overall. Readers who don’t know it have the chance to discover a writer who “has set the standard for elegant writing in English” about Latin American politics, society and culture — a writer who “gets at the truth the way a psychological novelist might,” as described by Sarah Kerr in a 2001 NYT review.