Meet Oolong. He was a Japanese rabbit with an unusually flat head on which his owner, Hironori Akutagawa, placed odd objects. Toilet paper. Carrots. Pancakes. Cookies.  The strange assortment atop the bunny’s head became the visual subject matter for Akutagawa’s blog, one of the Web’s first in 1999, which became a huge success. Next the photos showed up in a book, In Almost Every Picture #8, published by Netherlands-based Kesselskramer Publishing. 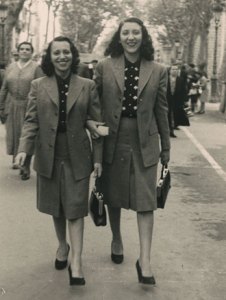 Oolong’s book is the most recent in a series featuring eccentric images randomly discovered and then published by Dutch art director Erik Kessels. Flea markets, for example, are one source for these odd treasures. That’s where Kessels found the images for Book #4, showcasing twins arm-in-arm in different clothes and settings. What’s fascinating is their very simplicity — plainness, actually — and the understated glimpse into a twins’ togetherness found “in almost every picture.” Except the last one. It is thought the missing sister passed away by then.

Odd but familiar is Book  #2, featuring photos of a couple’s parked car/taxi on the side of the road in various settings with the woman in the passenger seat.  And then there’s the bizarre Book #7, illustrating a woman at a shooting gallery, rifle in hand, taking aim. Her photos start in 1938 and end in 2006.

All eight books can be viewed in a slide show on the website of the U.K.’s modern design Wallpaper magazine. (Go here.) While these books may appear to be quirky art photography, they are valued collectibles. The earliest ones are hard to find, and so a complete set is rare. But then, you never know. One day, in a flea market somewhere, a set of In Almost Every Picture may be found.

On a final note: Luxembourg’s Centre nationale de l’audiovisuel in partnership with the Bibliothèque nationale de Luxembourg is hosting an exhibition of the photos from Book #1 called “A venir: I was here,” March 26 through June 13, 2010, in case you’re headed that way.