I’m reading War and Peace with WOSU’s senior broadcast technician, Eric French. We’re consuming the book in monthly installments, as if we were reading a Charles Dickens novel back in the time, when the Victorian novelist published sequential chapters in weekly periodicals. The version of War and Peace we’re reading is organized into 15 “books” and two epilogues. We’re finishing one “book” per month and then discussing it after a recording session.

This isn’t our first attempt to read the classic behemoth. We tried several years ago, reading simultaneously but without discussion, and we both gave up at book three, or thereabouts. For me, that had to do with the translation. I was reading the Richard Pevear and Larissa Volokhonsky translation, acclaimed for staying pure to Tolstoy’s original, including passages in French. But those passages interrupted the narrative flow, and the rest of the prose felt stiff to me. I didn’t like the reading experience. 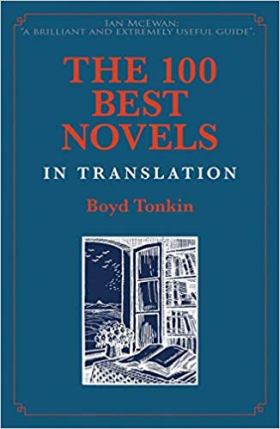 Boyd Tonkin’s The 100 Best Novels in Translation spans four centuries, from 1600 to 2000, listing his choices for top 100 novels in translation with the goal “not to lay down the law but point a way and, above all, open a conversation”. He begins with Don Quixote by Miguel de Cervantes and ends with The Feast of the Goat by Mario Vargas Llosa.

The 100 Best Novels in Translation is addictively browsable, and one needs to keep stickies at hand to mark the pages of novels to be read, which likely will be many. Tonkin provides insightful and compelling plot summaries for each of the 100 books, as well as recommended translators. In other words, this isn’t just a best 100 list of global literature; it’s also a guide for which translator to select.

For War and Peace, Tonkin recommends Anthony Briggs. Eric and I are reading what’s often referred to as “the Maudes,” whom Tonkin mentions. (I like the descriptive clause attached to them, as it would seem to provide an extra edge to knowing Tolstoy’s intent.) Here’s Tonkin’s explanation:

Translation: Napoleonic battle lines divide the partisans of War and Peace‘s translators. Anthony Briggs (2005) is sturdy, readable, reliable, colloquial. The more radical Richard Pevear and Larissa Volokohnsky (2007) have many champions — as do Louise and Aylmer Made, who worked with Tolstoy.

Translators determine how the prose is transformed into English, from smoothing out complex idioms and fixing odd sentence configurations to maintaining the awkwardness for fidelity to the original work. That fidelity is what I couldn’t take from the Pevear-Volokhonsky translation. Despite the fact they are considered the authoritative translators for Russian literature today, trying to get through their version of War and Peace felt like chewing wood. I’m not saying one translation is better than the other — I don’t have that kind of expertise — only that the Maudes gave me the story in a way that allowed me to sink into it.

From “The Politics of Translation” in the London Review of Books October 11, 2018:

The translator’s choices — between fidelity and re-visioning, between domestication and foreignisation — are distinct, but nevertheless bound up together, because a translation which remains culturally specific, keeping faith with local customs, commodities and allusions, isn’t likely to reach readers as broadly as a version which finds equivalents, and hence smooths out diversity… . Julian Barnes, in a tough and very thorough review of Lydia Davis’s translation of Flaubert, summed up the issue: ‘If you want the book in “English”,’ he asks, ‘what sort of English do you choose? Put simply, on the novel’s first page, do you want the schoolboy Charles Bovary’s trousers to be held up by braces, or do you want his pants to be held up by suspenders?’

As well as taking notes for future reading, I’ve combed Tonkin’s selections for the books I’ve read and compared them to the translators in my library. Some matched, some didn’t. Most surprising for me is that Tonkin does not recommend Lydia Davis for Madame Bovary, who’s widely considered to be among the best. Instead, he recommends Adam Thorpe.

Translation: Among recent versions, those by Lydia Davis and Geoffrey Wall both excel, but the novelist Adam Thorpe (2011) — who, brilliantly, employs only the English vocabulary of Flaubert’s time — achieves a flavour that approaches the dream-like strangeness of Flaubert’s hyper-realism.

For Memoirs of Hadrian by Marguerite Yourcenar, Tonkin recommends Grace Frick, which I have. Is there any other?

Translation: Collaborating with her life partner Grace Frick, Yourcenar helped to produce a fluent, subtle and serene English text in 1955.

Tonkin was literary editor and then senior writer at Britain’s The Independent between 1996 and 2016. During that time he re-founded The Independent Foreign Fiction Prize and co-judged it until it merged with the Man Booker International Prize in 2015. In his introduction to The 100 Best Novels in Translation, Tonkin says he tried keeping to those translations “that are both excellent and straighforward to find.” It’s yet another reason to have this book on hand — not just for his insight into the novels and translators but also for accessibility. Above all, though, this list of 100 offers that wonderful joy of discovery and re-discovery.

See Under: Love by David Grossman is included on Tonkin’s list. When it was first published, it came across my desk for review. It’s still in my bookcase, unread, and yet all these years it’s stayed with me, like some books do when we let them go, knocking at the door to be read. And so, thanks to coming upon it in this 100 best list, it will be.

6 thoughts on “The 100 Best Novels in Translation”