Every October, I meet with a book club to suggest books they might like to read. I bring a stack of literary fiction and share a little of the plot lines, the strength of the books and why I think they’ll like them. Last year, one of the participants asked me why I stopped mentioning The Man Booker Prize and National Book Awards finalists, which are announced in September and October. I gave a short reply that I had become disenchanted with the lists. Here’s the longer response.

The Man Booker lost my fandom when it began accepting American books published in England. Formerly, the selections contending for The Man Booker came from the British Commonwealth and the Republic of Ireland. I could depend on the list to introduce me to distinctive novels and new authors I otherwise would not have discovered. Bringing in the Americans overwhelmed the prize with their dominance in literary publishing. This article – “Top Authors Make Mass Call on Man Booker to Drop American Writers” — references “some critics, who believe the character of the prize has been altered by the presence of weighty US writers at the expense of unknown authors in Commonwealth countries.”

The National Book Award in Fiction didn’t lose my fandom as much as it lost the thrill for me. I’d see good books listed but didn’t regard them as ones that clearly stood apart. I’d see difficult books I had avoided in the year and think, this is my chance — but when I read them, I questioned whether or not I’d experienced enduring literature. Was I missing something?

This year, publishers submitted 1,637 books to be considered for the National Book Awards in five categories: fiction, non-fiction, poetry, young people’s literature and, new this year, translated literature. Judges whittled the submissions into the long list of 50 finalists (10 in each category) and then down to the short list of 25 (five in each category). I can only imagine the daunting task of all that reading – for the fiction judges alone, 368 books.

How do you begin to identify the award-worthy ones? Are there certain criteria that must be followed? How do you not get influenced by concerns that the long and short lists should reflect diversity, inclusion of independent presses, bold literary leaps but also accessibility, and deserving authors writing in obscurity. Would you make a selection that was less award-worthy to fit one of these concerns, putting aside a popular book that clearly should be on the list?

In 2012, Slate published Scandal at the National Book Awards. Was The Moviegoer’s victory in 1962 a fix? The article tells how Walker Percy’s debut “emerged victorious because of the partisanship of a husband-and-wife team.” It’s an interesting read. The Moviegoer won over the enduring classics Catch-22 by Joseph Heller, Revolutionary Road by Richard Yates and Franny and Zooey by J.D. Salinger.

William Giraldi writes about “lists of daring ones” in his introduction to his new book American Audacity: In Defense of Literary Daring. He’s referring to authors…

who refused to compromise their visions, who dared not just to make it new but to make it true, make it lovely and wise, allying the enigmas of spirit to the avowals of heart and mind, and always in a prose that knows it must do double work, reaching within and without.

The works of these daring ones are what I expect to show up, at least in part, among the National Book Awards in the fiction category. The fiction award has long been known for being unpredictable and for elevating lesser-known, deserving books. It also is known for championing literature at its best. For many years, I had the thrill, the excitement that, when I read those nominees unfamiliar to me, I would be taken to new, remarkable places in storytelling. That thrill doesn’t happen as much anymore, although I remain ever hopeful in my skepticism.

Below are the five fiction finalists for the 2018 National Book Awards. The list contains two novels I have read. Both I thought were good but not literature at its very best. (I’ve marked them with an asterisk.)  You can get the finalists in all the categories by visiting the National Book Awards website. Winners will be announced November 14. 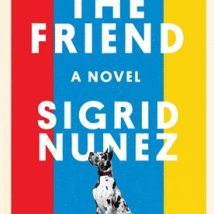 *The Friend by Sigrid Nunez
A novel about a woman grieving the loss of her best friend and mentor. She surprisingly inherits his Great Dane, and the dog’s presence causes trouble for her rent-stabilized Manhattan apartment. Still, Apollo becomes a companion she’s determined to hold onto. A quiet meditation about friendship, loss and the writing life.

*Where the Dead Sit Talking by Brandon Hobson
A dark coming of age story about American Indian foster teens in rural Oklahoma. The narrator, Sequoyah, looks back to 1989 when he was 15 years old and witnessed the death of a friend. The story leaves an unforgettable impression of the overpowering worthlessness experienced by these foster teens.

Florida by Lauren Groff
A collection of short stories set in the state that became Groff’s new home when her husband moved the family there for business purposes. From the book’s description: “The stories in this collection span characters, towns, decades, even centuries, but Florida—its landscape, climate, history, and state of mind—becomes its gravitational center…”

A Lucky Man by Jamel Brinkley
Another short story collection, this one set in Brooklyn and the Bronx where the author grew up. Strong in themes of masculinity, the book (from its description) “reflects the tenderness and vulnerability of black men and boys whose hopes sometimes betray them, especially in a world shaped by race, gender, and class.”

The Great Believers by Rebecca Makkai
A novel that takes place in two periods of time: 1980’s Chicago during the AIDS epidemic when an art gallery director negotiates the acquisition of exclusive 1920’s paintings; and 2015 Paris where a woman, whose older brother died in the epidemic, searches for her estranged daughter. According to the book’s description, “The two intertwining stories take us through the heartbreak of the eighties and the chaos of the modern world…”

I’ll be recommending books on Friday, December 17, at 11 a.m. You can stream the live show online, sign up for the podcast, or listen from the archives at the NPR member station WOSU 89.7 FM. All Sides Weekend Books airs the third Friday every month with occasional exceptions.