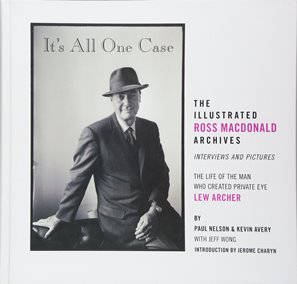 In late April 1976, Kenneth Millar wrote a letter to his friend Eudora Welty. Part of the letter, written on Algonquin Hotel stationery, said this:

“At present I’m having a marathon interview (third day, and three or four to go) with a rock music critic named Paul Nelson who writes for Rolling Stone. He wears dark glasses and never takes off his flat cloth cap even in a dining room but seems remarkably bright and comes from a place in Minnesota just over the line from Winnipeg. I love these temporal and geographical reverberations.”* (Millar spent much of his childhood in Canada.)

Kenneth Millar is more widely known as crime novelist Ross Macdonald, who captivated mystery readers in the 1950’s and 1960’s with private detective Lew Archer. He’s also considered to be one of the best American crime writers, alongside Dashiell Hammett and Raymond Chandler. The marathon interview referred to in the letter resulted in 47 recorded hours. Paul Nelson, a top rock & roll critic and culture journalist in the 1960’s and 1970’s, intended to turn the massive amount of information into an article for Rolling Stone and a book. Neither happened. Now, however, that marathon is captured in a beautifully illustrated, large-size book that’s seductively browsable.

It’s All One Case: The Illustrated Ross Macdonald Archives paints a fascinating portrait of Macdonald’s life and work. Presented in the interviews’ Q&A format, it’s organized by sections devoted to Macdonald’s beginnings, influences, student and teaching days, writing, the books, critics and more – 30 chapters in all. Every glossy page is a treasure trove of cool stuff, from photos of letters and manuscript pages to comprehensive layouts of side-by-side editions of each book (paperbacks, hardcovers and foreign editions). As an example, 25 photos showcase the 1947 novel Blue City. Also included are photos of the August and September 1950 issue of Esquire magazine that serialized the novel.

In other words, It’s All One Case isn’t just for Ross Macdonald fans, but also for book collectors and bibliophiles who love the deep dive into literary history. To put it in perspective, I bought this book as a Christmas gift to myself because I’m drawn to Ross Macdonald’s life and work. That happened after I read, this past year, the letters he exchanged with Eudora Welty,* which immersed me in their friendship, writing lives, mutual admiration and respectful, platonic love. I have not read Macdonald’s novels, and yet here I am drawn to these interviews and archives, which I just discovered, although It’s All One Case was published last year. I figure, by the time I get to The Galton Case, The Chill, Black Money, The Instant Enemy or any other Lew Archer mysteries, I’ll have a feel for how the life experiences of this acclaimed author, whose talent and insight elevated the detective novel to a new level, affected his fiction.

The book’s foreword and introduction praise the interviewer and Rolling Stone contributor Paul Nelson, whose last century’s fame has faded into the unknown. Crime novelist Jerome Charyn in the book’s foreword describes Nelson as “the most prominent rock critic of his era.” Nelson also was a huge Ross Macdonald fan. Author Kevin Avery writes in the book’s introduction that Nelson read all of Macdonald’s books and collected their first editions. One night, the obsessive fan in Nelson found Macdonald’s home phone number in the Santa Barbara directory and cold-called “on the pretext of asking where I could get the two early books.” Macdonald stayed on the phone and talked with Nelson for more than an hour. Five years later, with Nelson in the heyday of his journalism career, the marathon interviews began.

*From Meanwhile There Are Letters: The Correspondence of Eudora Welty and Ross Macdonald edited and with an introduction by Suzanne Marrs & Tom Nolan; page 292.

2 thoughts on “Getting to know Ross Macdonald”

I’ll be on air discussing book recommendations Friday,  October 15, at 11 a.m. You can stream the show online, sign up for the podcast, or listen from the archives at the NPR member station WOSU 89.7 FM. All Sides Weekend Books airs the third Friday every month.