Below are this year’s six finalists. Two are from the United States. The others are from the UK and Canada. All are available in the US. The winner is to be announced on October 25.

The Sellout by Paul Beatty
The narrator from Dickens, California, (a city that’s been disappeared, which he’s trying to get back on the map) initiates the unthinkable when he reinstates slavery and segregates the local high school. But hold on — it’s a “biting satire,” according to the publisher’s website, about “a young man’s isolated upbringing and the race trial that sends him to the Supreme Court  … It challenges the sacred tenets of the United States Constitution, urban life, the civil rights movement, the father-son relationship, and the holy grail of racial equality — the black Chinese restaurant.” The New York Times, Boston Globe, Wall Street Journal, Kirkus Reviews and Publisher’s Weekly listed Beatty’s comic novel among their Best Books of 2015. Also, it won the 2015 National Book Critics Circle Award in Fiction.

Hot Milk by Debra Levy
Levy’s previous novel, Swimming Home, which was shortlisted for the Man Booker 2012 prize, is an unforgettable story I recommend. (A family arrives at their vacation villa and finds an attractive woman swimming in the villa’s pool. And from there, it gets interesting.) Hot Milk, Levy’s new novel, promises to be similarly intriguing. Bloomsbury, the publisher, writes on their website: “Sofia, a young anthropologist, has spent much of her life trying to solve the mystery of her mother’s unexplainable illness. She is frustrated with Rose and her constant complaints, but utterly relieved to be called to abandon her own disappointing fledgling adult life. She and her mother travel to the searing, arid coast of southern Spain to see a famous consultant — their very last chance — in the hope that he might cure her unpredictable limb paralysis.” From The Guardian: “This isn’t a long novel, but it is dense in the way a poem is dense, rich with meaning poured into its simple language.”

His Bloody Project
by Graeme Macrae Burnet
This novel had me from the forecasts, portending to be one of those “gripping” novels that hook you ‘til the end. Skyhorse Publishing lays out the book’s premise: “A brutal triple murder in a remote Scottish farming community in 1869 leads to the arrest of seventeen-year-old Roderick Macrae. There is no question that Macrae committed this terrible act. What would lead such a shy and intelligent boy down this bloody path? And will he hang for his crime?” The narrative is multi-layered, including a collection of documents (e.g., medical reports, psychological evaluations) and the accused’s memoir. Skyhorse describes it as “both thrilling and luridly entertaining from an exceptional new voice.”

Eileen by Ottessa Moshfegh
Ever since its publication in the United States last year, Moshfegh’s novel kept popping up and enticing me to read it – from rave reviews to being a contender for the National Book Critics Circle Award in Fiction. When it got short listed for the Man Booker I thought, okay, that’s it, I surrender. My hesitancy was only that I wasn’t in the mood for one more “girl crime” or “wicked girl” book. Now, having read this brilliant novel, I not only see why it received high marks but wonder why it didn’t win more awards. It’s a classic novel, whose perverted narrator is of the memorable kind, like Humbert Humbert (Lolita) or Frederick Clegg (The Collector). In 1964, Eileen works in a juvenile boy’s prison and lives with her constantly drunk father in a mess of a suburban home. Then, an enigmatic woman is hired by prison administration. Eileen wants to please her, and she falls into a dark situation that changes the course of her life. What’s brilliant about this book is the patience the author gives to her narrator, slowly letting her interior story unfold to a highly rewarding conclusion. 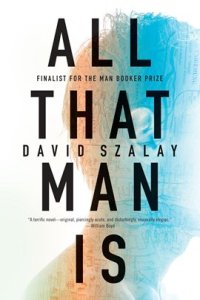 All That Man Is by David Szalay
This Man Booker nominee is a collection of nine connected short stories. From the website of the US publisher, Graywolf Press: “Nine men. Each of them at a different stage in life, each of them away from home, and each of them striving — in the suburbs of Prague, in an overdeveloped Alpine village, beside a Belgian motorway, in a dingy Cyprus hotel — to understand what it means to be alive, here and now.” A few critics have mentioned running out to read Szalay’s previous novels and, by that, indicate talent not to be overlooked. The Guardian writes: “But if you are unfamiliar with [Szalay’s] work, let me urge you to read him since, on this evidence, he is one of those rare writers with skill in all the disciplines that first-rate fiction requires.” 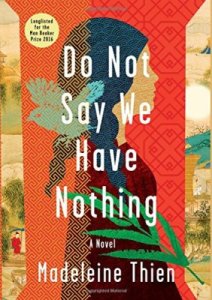 Do Not Say We Have Nothing
by Madeleine Thien
Of all six, this novel is the one door-stopper at more than 400 pages. But it’s an epic story, and epics tend to warrant the length. From the publisher’s website: “Master storyteller Madeleine Thien takes us inside an extended family in China, showing us the lives of two successive generations — those who lived through Mao’s Cultural Revolution and their children, who became the students protesting in Tiananmen Square. At the center of this epic story are two young women, Marie and Ai-Ming.” A talented pianist, a brilliant composer and a violin prodigy are among the characters. From the Man Booker website: “It is a story of revolutionary idealism, music, and silence, in which three musicians – the shy and brilliant composer Sparrow, the violin prodigy Zhuli, and the enigmatic pianist Kai – struggle during China’s relentless Cultural Revolution to remain loyal to one another and to the music they have devoted their lives to.”