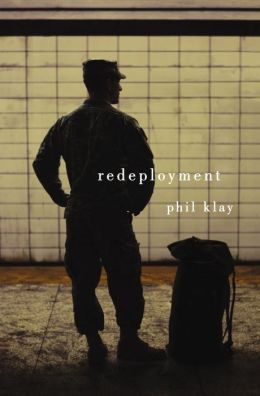 I want to begin with a scene from one of the 12 stories in Phil Klay’s debut to illustrate the collection’s impact when communicating what it’s like to be a soldier and a U.S. Marine. Klay, a Dartmouth graduate, is a former U.S. Marine who served in the Iraq conflict, and so we know his imagined storytelling draws from personal exposure and perhaps experience. All the narrators in Redeployment speak to us in the first person. They are U.S. Marines predominantly in Iraq but also Afghanistan. In this one scene from the title story, Sergeant Price has just returned to civilian life. His wife takes him shopping in the city.

What he sees are windows. Everywhere. People walking past them “like it’s no big deal.” The last time he walked down a city street, it was in Fallujah with heavily armed fellow Marines methodically scanning rooftops and windows for anything out-of-place because in the city “there’s a million places they can kill you from.” In the safe American city, our narrator startles several times, checking for his weapon, but it’s not there. Everything inside him is wired for high alert. His wife gives him clothes to try on in American Eagle Outfitters, and once inside the dressing room, Sgt. Price doesn’t want to come out. In this brief scene, the pressure on a returning soldier to calibrate extremes seizes us with piercing clarity.

In the shortest story, Klay fills the narrative with military acronyms without defining them and so immerses us in the lingo. The technique is powerful, telling less a story than putting us inside the military atmosphere: “EOD handled the bombs. SSTP treated the wounds. PRP processed the bodies. The 08s fired DPICM. The MAW provided CAS. The 03s patrolled the MSRs. Me and PFC handled the money.”

These U.S. Marines we spend time with in Redeployment wrestle with the honor and thrill of being war heroes and the guilt of their actions. They don’t want people back home to thank them or say they respect them or act like some caring person. They yearn for women but cannot connect to them beyond sexual need. And once out of the war, they live a discrepancy between us and them that’s stressfully noble and heart-rending. One veteran, pressed to tell stories, fabricates details and spins them according to what he thinks the civilian listeners want to hear, until one time he tells the truth, and he never tells another story again.

Klay digs deeply, honestly and convincingly into the inner lives of his men, using a range of narrators — from a solider in psychological operations to one in mortuary affairs; from an artillery gunner to an adjutant; from a military chaplain to a foreign service officer. What they all have in common is  experience in a place that lives and breathes daily violence and defies civilian comprehension, including the dissonant concept of killing that equates to a good day’s work. In one story, soldiers dance naked on a rooftop to incite insurgents to open fire, creating an opportunity for the Marines to fire back and inflate their kill stats.

Redeployment falls under the category of essential storytelling that takes us away from this world and then puts us back in it with a firmer grip on our perception of the Marine combat experience. It’s impressive, enduring fictional truth that’s so effective we know, with our deepest feelings, what lies behind the military chaplain’s statement when he says, “Most Marines are good kids. Really good kids. But it’s like they say, this is a morally bruising battlefield.”

I’ll be recommending books on Friday, December 17, at 11 a.m. You can stream the live show online, sign up for the podcast, or listen from the archives at the NPR member station WOSU 89.7 FM. All Sides Weekend Books airs the third Friday every month with occasional exceptions.