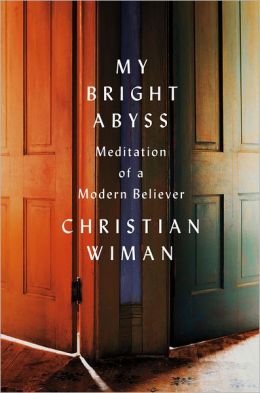 Christian Wiman is the editor of Poetry magazine, the oldest magazine of verse in the world, founded in 1912 by Harriet Monroe. Monroe discovered and gave early promotion in the magazine to many then unknown poets who became famous, such as Ezra Pound, Marianne Moore, Vachel Lindsay, Robert Frost and Carl Sandburg. Wiman, himself a poet, wrote an essay about despair and faith seven years ago that went viral in print anthologies, church services and reading groups, as well as online. Letters poured in regarding this essay he describes as “my entire existence crammed into eight pages.” The response surprised him and, according to the preface of his new book, My Bright Abyss: Meditation of a Modern Believer, brought to light a need for continued dialogue — with himself and this hungry audience — on the topic of understanding his faith in God while living with the diagnosis of an incurable but unpredictable cancer.

My Bright Abyss is composed of thoughts, what Wiman calls prose fragments, organized into chapters. It is part memoir, part meditation and part probing of “that burn of being that drives us out of ourselves, that insistent, persistent gravity of the ghost called God.” Throughout, Wiman quotes passages from poems to expand on a point, including the work of Osip Mandelstam, Gerard Manley Hopkins and Wallace Stevens. In one chapter, he mentions the three living novelists whose work means the most to him: Cormac McCarthy (Blood Meridian), Marilynne Robinson (Housekeeping and Gilead) and Fanny Howe (Indivisible).

Wiman writes compellingly about the yin and yang of his faith; what lies beyond the temporal landscape of modern life; and why we don’t really begin to know life until we’re faced with death. Below is the first paragraph to the chapter “Hive of Nerves.” There are many quote-worthy paragraphs and sentences in the book. This is the one I kept coming back to:

“At a dinner with friends the talk turns, as it often does these days, to the problem of anxiety: how it is consuming everyone; how the very technologies we have developed to save time and thereby lessen anxiety have only degraded the quality of the former and exacerbated the latter; how we all need to ‘give ourselves a break’ before we implode. Everyone has some means of relief — tennis, yoga, a massage every Thursday — but the very way in which those activities are framed as apart from regular life suggests the extent to which that relief is temporary (if even that: a couple of us admit that our ‘recreational’ activities partake of the same simmering, near-obsessive panic as the rest of our lives). There is something circular and static to our conversation, which doesn’t end so much as fizzle indeterminately out, and though there is always some comfort in comparing maladies, I am left with the uneasy feeling that my own private anxieties have actually increased by becoming momentarily collective — or not, not that, increased by not becoming collective, increased by the reinforcement of my loneliness within the collective context, like that penetrating but enervating stab of self one feels sometimes in an anonymous crowd. It is a full day later before it occurs to me that not once, not in any form, not even with the ghost of a suggestion, did any of us mention God.”

The American Scholar in its Winter 2009 issue published the first chapter of My Bright Abyss — you can read it here. The subtitle perfectly expresses the heart of the complete book: I never felt the pain of unbelief until I believed. But belief itself is hardly painless.

The original essay Wiman wrote seven years ago also can be found in The American Scholar.

On June 30, 2013, Christian Wiman will leave his post as editor of Poetry magazine. Don Share, the magazine’s senior editor, will become the new editor on July 1, 2013.

3 thoughts on “Where lies the ulterior truth?”

You can stream the live show online, sign up for the podcast, or listen from the archives at the NPR member station WOSU 89.7 FM. All Sides Weekend Books airs the third Friday every month with occasional exceptions.