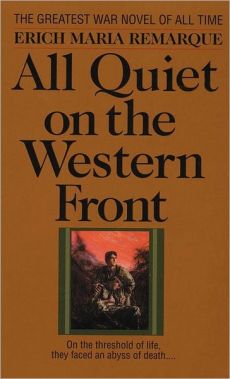 German novelist Erich Maria Remarque (1898-1970) published All Quiet on the Western Front in 1929. He went on to publish several other novels, but the first remains his hallmark. It’s not just a classic war novel, but frequently categorized and hailed as the greatest war novel of all time.

In brief, the story is about German soldier Paul Baumer, the narrator, who responsibly joins the German army with high-school classmates, only to discover it’s a grotesque and senseless horror show. His innocence doesn’t simply vanish in the trench warfare, hand-to-hand fighting and poison gas.  It’s ripped away, and he’s fully aware of the loss.

Paul’s piercing recognitions and reflections moved me. I read them and reread them.  I read them out loud. One time it was the scene where Paul, standing sentry, dangerously allows himself to think about the good times of his youth, times now unreachable for all that he and his friends have been through in the war. He despairs the harsh change: “We are forlorn like children, and experienced like old men, we are crude and sorrowful and superficial – I believe we are lost.”

Another passage I kept returning to was when Paul guards Russian prisoners of war.  He recognizes they are enemies, but only in so far as those who declared the war in the first place deemed them enemies: “But who can draw such a distinction when he looks at these quiet men with their childlike faces and apostles’ beards. Any non-commissioned officer is more of an enemy to a recruit, any schoolmaster to a pupil, than they are to us.”

All Quiet on the Western Front typically appears on bookstore tables set up to cater to students’ summer reading assignments. I was in the store, shopping for Pat Barker’s award-winning First World War Regeneration trilogy. I changed my mind, though, and picked up Remarque’s classic, thinking, “Ah, this one first!”

Eventually I will get to Barker’s trilogy, and when I do, Paul’s fictional journey will inform it – or any other WWI story – by virtue of Remarque’s bruising emotional realism. By the way, on a whim, I Googled “the greatest war novel of all time” and got an Amazon list of 25 novels ranging from Keneally’s WWII Schindler’s List to Orwell’s Russian Revolution Animal Farm. I wouldn’t rely on an online bookseller to be an authority for such a list, but it’s a curious combination to ponder.

2 thoughts on “The greatest war novel of all time”

I’ll be giving book recommendations on Friday, October 29, at 11 a.m. You can stream the live show online, sign up for the podcast, or listen from the archives at the NPR member station WOSU 89.7 FM. All Sides Weekend Books airs the third Friday every month with some exceptions, such as during pledge drives.